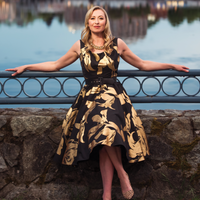 No cover. In the friendly waterview restaurant of the historic Sylvia Hotel. Angela Verbrugge Angela Verbrugge is a jazz vocalist who "possesses a winsome, brightly burnished, pliable voice, ample emotional intelligence, and considerable songwriting skills." (JazzTimes) Angela Verbrugge caught listeners’ ears with her debut album The Night We Couldn't Say Good Night (released on Gut String Records, NYC) and she won this year’s JazzTimes Readers’ Poll in the female jazz vocalist category. The magazine’s review of her album describes that Angela, who takes inspiration from vintage musicals, the swing era, blues, and bebop, has “conspicuously good taste”. Toronto Music Report writes that she is “a gem of a vocalist who makes all her chosen material sound magical. Her song-writing collaborations have received features in JAZZIZ Magazine. JazzWeekly describes the former actress as “fun and quirky, hip and a hoot, wispy and romantic; she slithers and oozes, and cleverly swings.” Award-winning vocal jazz author, Wall Street Journal writer described her debut album as having, "a top-drawer arranging crew and cast of expert musicians", amd noting that Angela possesses " a vocal sound that's full of depth and nuance - welcoming the light but without denying the existence of the darkness". She has appeared at leading Canadian jazz clubs and festivals. Angela toured to perform at Pizza Express Soho London, the top jazz clubs in Istanbul, and made featured guest concert appearances in Spain and Germany this fall. Each November, she helps Canadian remember the wartime era music by performing many 1940s-themed concerts around Remembrance Day. She is releasing singles in anticipation of her second album, out March 2022. Miles Black Based in Vancouver, BC, Miles Black is a highly respected career musician bringing an enormous wealth of musical experience and expertise to most every facet of the music industry. Firstly known as one of Canada's most accomplished jazz pianists, Miles is also highly acclaimed and sought after as an arranger, producer, composer, session musician, guitarist, vocalist, bassist, saxophonist, songwriter, and musical theatre director. Adding to that, he has worked as a music therapist and collegiate music instructor. Especially in Vancouver, Miles Black is well know as the "first call' when musicians are looking for top professional enhancements to their projects.

Always in high demand, Miles is currently involved in several high level projects at this time. At the present he is co-leading a modern jazz quartet with the aptly named “Altered Laws” group that also highlights saxophonist and flautist Tom Keenlyside (seetomkeenlyside.com). As a prolific composer and writer, and with lyricist/vocalist Glenda Rae alone, Miles has over 400 written song credits.

As well since 1993, Mr. Black has proudly been a member of the Oliver Gannon Quartet performing keyboard duties including the Hammond B3. Mr. Gannon is a Juno-award winning jazz guitarist with extensive performance experience around the globe. (www.olivergannon.com).

Miles is currently working as pianist/composer with The Mike Allen Quartet. This group is also known as the "Faculty Jazz Collective" at Western Washington University, where they perform as musical mentors for the jazz students. (see mikeallenjazz.com).

Since 2009, Black has been a member of TRIOLOGY, which features Bill Coon on Guitar, and Jodi Proznick on Bass. Their first album is to be released on the CellarLive label, soon followed by album #2. This group is fashioned after the great Jazz Trios of Oscar Peterson and Nat King Cole. (see triologymusic.com)

On the education front, Miles has been working for Victoria based PG Music since 1991. As a performer and teacher he has helped to produce countless music software programs for public consumption. Just a few of these include “The Jazz Pianist 1&2”,”The NewAge Pianist”, “The Children’s Pianist”, “The Modern Jazz Pianist”, “Jazz Piano Masterclass”, “Blues Piano Masterclass” and an Oscar Peterson CD Rom, complete with transcriptions. He has also written, produced and performed many add-ons for PG Music's popular “Band-in-a-Box” programs.