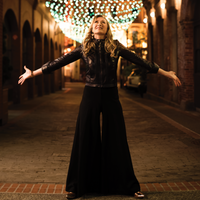 Angela Verbrugge is a jazz vocalist who "possesses a winsome, brightly burnished, pliable voice, ample emotional intelligence, and considerable songwriting skills." (JazzTimes) Angela Verbrugge caught listeners’ ears with her debut album The Night We Couldn't Say Good Night (released on Gut String Records, NYC) and she won this year’s JazzTimes Readers’ Poll in the female jazz vocalist category. The magazine’s review of her album describes that Angela, who takes inspiration from vintage musicals, the swing era, blues, and bebop, has “conspicuously good taste”. Toronto Music Report writes that she is “a gem of a vocalist who makes all her chosen material sound magical. Her song-writing collaborations have received features in JAZZIZ Magazine. JazzWeekly describes the former actress as “fun and quirky, hip and a hoot, wispy and romantic; she slithers and oozes, and cleverly swings.” Award-winning vocal jazz author, Wall Street Journal writer described her debut album as having, "a top-drawer arranging crew and cast of expert musicians", amd noting that Angela possesses " a vocal sound that's full of depth and nuance - welcoming the light but without denying the existence of the darkness". She has appeared at leading Canadian jazz clubs and festivals. Angela toured to perform at Pizza Express Soho London, the top jazz clubs in Istanbul, and made featured guest concert appearances in Spain and Germany in October 2021. She is releasing singles in anticipation of her second album, out March 18, 2022.

Ray Gallon SHORT BIO A NYC-native, pianist Ray Gallon has been a mainstay on the jazz scene for over thirty years. Rooted in bebop and blues, his expressive, swingin’ playing melds old and new into a fresh, original style. As a young player, Ray was taken under the wing of piano giants John Lewis, Hank Jones, and ‪Jaki Byard. He has performed at major jazz festivals and venues around the world with such luminaries as Ron Carter, ‪Lionel Hampton, ‪Art Farmer, ‪Benny Golson, George Adams, ‪Les Paul, and ‪Wycliffe Gordon. Ray has appeared at the White House and the Kennedy Center, sharing the stage with jazz legends ‪Dizzy Gillespie, ‪Milt Jackson, Sweets Edison, and Joe Williams. An in-demand accompanist, he has worked with many vocal greats, including Jon Hendricks, ‪Sheila Jordan, ‪Dakota Staton, ‪Gloria Lynne, ‪Jane Monheit and ‪Chaka Khan. Ray's inventive compositions have been recorded by acclaimed artists T.S. Monk and George Adams. His upcoming trio album, Make Your Move, features the stellar rhythm section of David Wong and Kenny Washington. Ray is a full-time faculty member of the jazz program at The City College of NY in Harlem and the Vermont Jazz Center’s summer workshops and has taught at Juilliard and The New School.

Neil Swainson Neil Swainson has toured and recorded with George Shearing, Rob McConnell, Roberta Gambarini, Woody Shaw and many others. He is one of the most recorded Canadian jazz bassists and the Toronto-based musician has played on recordings that have won five JUNO-awards.

Terry Clarke Having recorded over 300 albums with various jazz artists, Terry Clarke is a familiar face at Jazz Festivals, Concert Halls and Venues throughout the world. Terry Clarke’s most recent release is Bick’s Bag (Triplet Records), featuring the trio of Bill Mays, Neil Swainson and Terry Clarke. The well-received recording is a tribute to Canadian jazz guitar legend, Ed Bickert. Terry Clarke continues to perform and record with a number of international artists, such as Nancy Wilson, Bill Mays, Renee Rosnes, Jim Hall and Helen Merrill, as well as with an exciting line-up of Canadian musicians such as David Braid, Jake Langley, Don Thompson, Nancy Walker, Neil Swainson and David Occhipinti. Terry is also an enthusiastic jazz educator, and for the past three years has been a member of the Faculty of Music at the University of Toronto, and for four consecutive years (2002-2005), he has been honoured as “Drummer of the Year” at the annual National Jazz Awards. Terry Clarke is also extremely proud to have been named as a Member of the Order of Canada.